Are ATM’s On The Way Out?

Is the future bright or not so bright for the ATM machine? 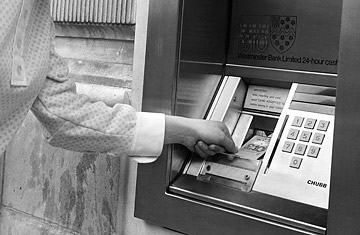 Think about lines, think about waiting and think about filling in forms to get access to your own funds. ATM’s seem to be taken for granted these days. The ease with which we can withdraw funds or deposit then is something we all love, but is the ATM doomed?

Let’s take India as an example. 208,000 ATM’s (roughly). For country where the banking system is unreliable at best the ATM model seems ideal. people can conduct their financial dealings at a ‘hole in the wall’ it seems the ideal situation for all involved. The banks reduce the stress of higher numbers and their customers have access ti financial services that do not require the services of human beings.

There is a small problem. People in India have rejected ATM’s.

Why? Because India is rapidly becoming a digital economy – and trend is becoming common across the globe. It not that people are rejecting ATM’s it’s just that they are becoming redundant. Why on earth would anyone stand in line (again) to access their funds. The wave of future is online and digital currency is riding the crest of that wave.

There can be absolutely no doubt that the ATM will be around for a while, however it does seem that its days are numbered. People are going to turn increasingly towards digital currency. They simply do not have to rely on banks anymore to hold their earnings and allow them for a fee to withdraw them. That model is based on the fact that decades ago banks would secure your money in a physical form.

That is no longer the case – a clients money does not exist. It is in the cloud, obscured by deals and leveraged options. Consumers are becoming aware that there are other options when it comes to their cash. And that will spell doom for the humble ATM.